To the untrained eye, Carts Guru and Omnisend are very similar products. Both are marketing automation tools for e-commerce stores offering audience segmentation, multi-channel campaigns, and real-time metrics. So what are the main differences? How should one decide between these two seemingly similar tools?
‍
In order to properly compare Carts Guru and Omnisend, I will build a summer holiday sales campaign on each platform, each time using the basic starter plan, and analyze the effectiveness of each tool during the main stages of the process.
‍
So, let’s dive right in! Starting with the first stage in creating our summer sale campaign: segmenting your audience into a list.

At first glance, it’s obvious that both Carts Guru and Omnisend have the basic segmentation filters covered. This includes details about the contact, such as:
Details about their purchasing history, such as:
Or details about their interaction with previous marketing communications, such as:
From these filters alone it’s safe to say that each platform can feel confident in the claim that they offer “in-depth segmentation”. Using either tool, e-merchants will be able to easily segment their contacts into the most commonly used groups such as first-time purchasers, VIP customers, or at-risk customers. But how do their audience segmentation capabilities differ?

Omnisend offers a more detailed segmentation in regards to the customers purchasing history, allowing e-merchants to segment their audience based on whether or not a customer has made a purchase since your last marketing campaign.
‍
You can do this through Carts Guru, but you would have to manually input the dates of your most recent campaign. 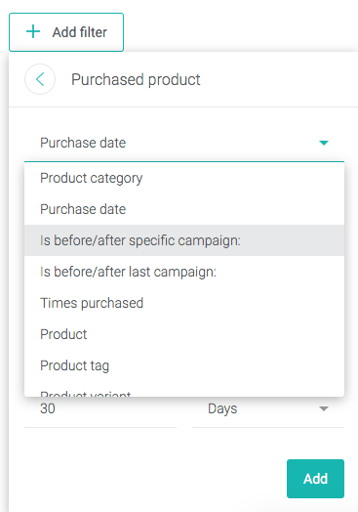 Omnisend contact filters
Carts Guru, on the other hand, offers more in-depth segmentation when it comes to the customer’s interactions with your past marketing communications. While Omnisend allows users to filter contacts based on whether they opened or clicked an email, Carts Guru offers this for SMS and Facebook messages as well, providing e-merchants with a more accurate understanding of exactly what marketing materials their customers have already seen.
‍
With Carts Guru e-merchants also have the ability to create a static or a dynamic list. To build a static list, e-merchants have to add or remove all contacts manually. A dynamic list, however, adds and removes contacts automatically depending on whether or not they fit the set of filters that define the list. 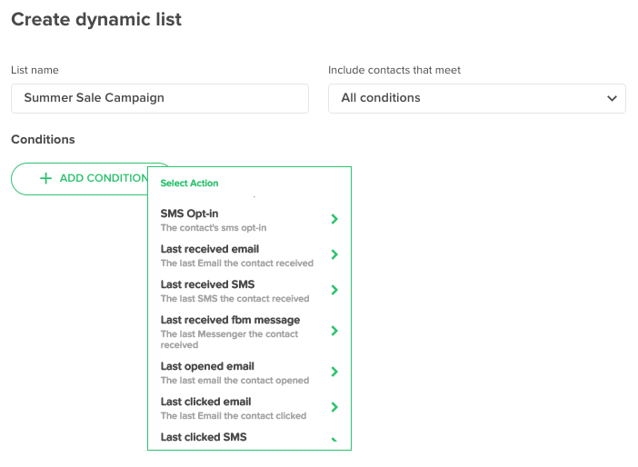 Carts Guru dynamic list filters
While both Carts Guru and Omnisend allow me to divide my audience into detailed segments, for a Summer Sale campaign I’ll want to message my entire contacts list, so I create an ‘all contacts’ list in each platform and move onto designing my messaging templates.

Both Carts Guru and Omnisend provide e-merchants with high-quality email template builders. Each platform allows companies to add images and edit the colors and fonts to ensure that their template fits perfectly alongside the brand’s existing designs.
‍
Within Carts Guru you can also design templates for SMS and Facebook messages, however with Omnisend, you create the message while building your workflow. For this example, we’ll just compare the email template builders.

The email template builders on each platform are in a drag-and-drop format and include sections such as:
Along with many more… 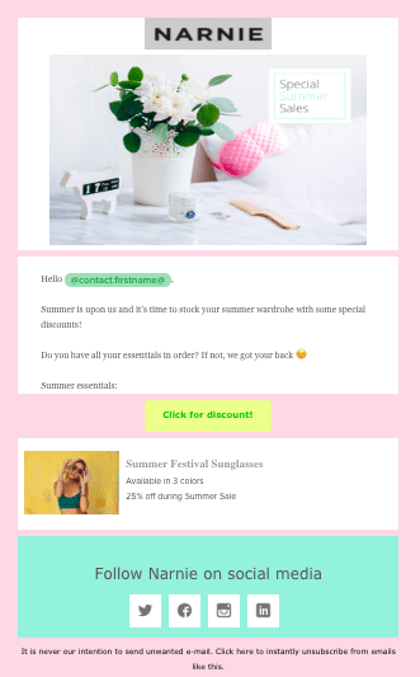 Carts Guru template builder
One main differentiating factor that I found while building the templates is that Omnisend includes the Omnisend logo at the bottom of every template, and it can’t be removed. Carts Guru, on the other hand, doesn’t include any of their own information or branding on the messaging templates.

With the audience segmented and the messaging templates created, the final step before I can send my holiday campaigns is to design the workflow.
‍
Carts Guru and Omnisend both offer customizable multichannel workflows which at first glance look quite similar. In order to properly compare the two, I’ll run through the features that can be added into a workflow when using either platform.

Time Delay - The most basic feature present in each tool is a time delay. Time delays work to ensure that customers don’t receive too many messages at once. Time delays are a very simple tool and both Omnisend and Carts Guru’s time delay features seem to work well.

Actions - In this context, an ‘action’ is any sent communication. As both platforms boast multichannel capabilities, it comes as no surprise that users can add email, SMS, or Facebook messages into the workflow using either platform (although it’s important to note that Facebook messenger is only available in the Omnisend pro-plan while with Carts Guru it’s available for everyone).

‍Triggers - With both tools, users are able to input a ‘trigger’ that kicks-off the start of their campaign. In this sense, a ‘trigger’ refers to an action completed by a customer such as abandoning a cart or completing a purchase. Using the Carts Guru platform triggers goes deeper than this, as not only can triggers be used to start a campaign, they can also be input within the workflow. These mid-workflow triggers react to whether a customer has ‘clicked’, ‘opened’ or ‘unsubscribed’ from the message that was most recently sent to them, and allows users to send different messages to customers depending on their reaction to the previous marketing material you sent. 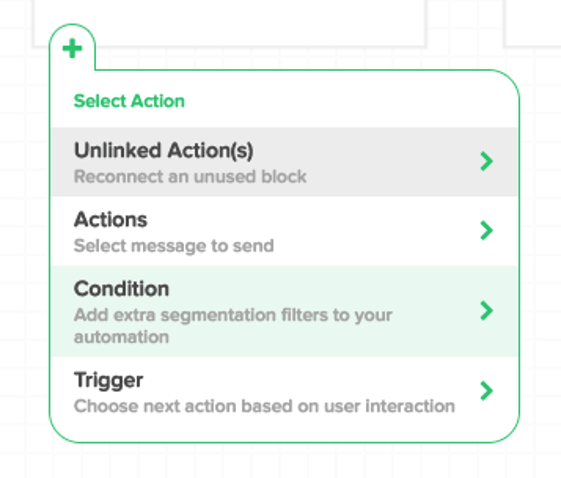 Carts Guru in-workflow options
Conditions - Conditions (Carts Guru) and contact tags (Omnisend) are both inserted into a workflow to further segment your audience. On both platforms, the conditions include properties about the customer, such as their name or location, or properties about their history on your site, such as their last visit or average amount spent per purchase.

After exploring the functionality of both the Carts Guru and Omnisend workflow tools, two differentiating points stood out.
‍
Firstly, the Carts Guru workflow reacts according to your customer’s interaction with the previous messages in the campaign. There are two ways that you can react to the actions of your customers with Carts Guru:
Secondly, whenever you insert a ‘contact tag’ into an Omnisend workflow, you significantly narrow the scope of your remaining campaign. For example, if I was to input a ‘contact tag’ that specified only VIP customers, I have removed every non-VIP customer from the remainder of the campaign.

Omnisend Automation - non-reactive workflow
With Carts Guru, this is not the case. After inputting a condition you are presented with the options ‘true’ or ‘false’ which allows you to send a VIP campaign to your VIP customers while at the same time sending a non-VIP campaign to keep your remaining customers engaged. 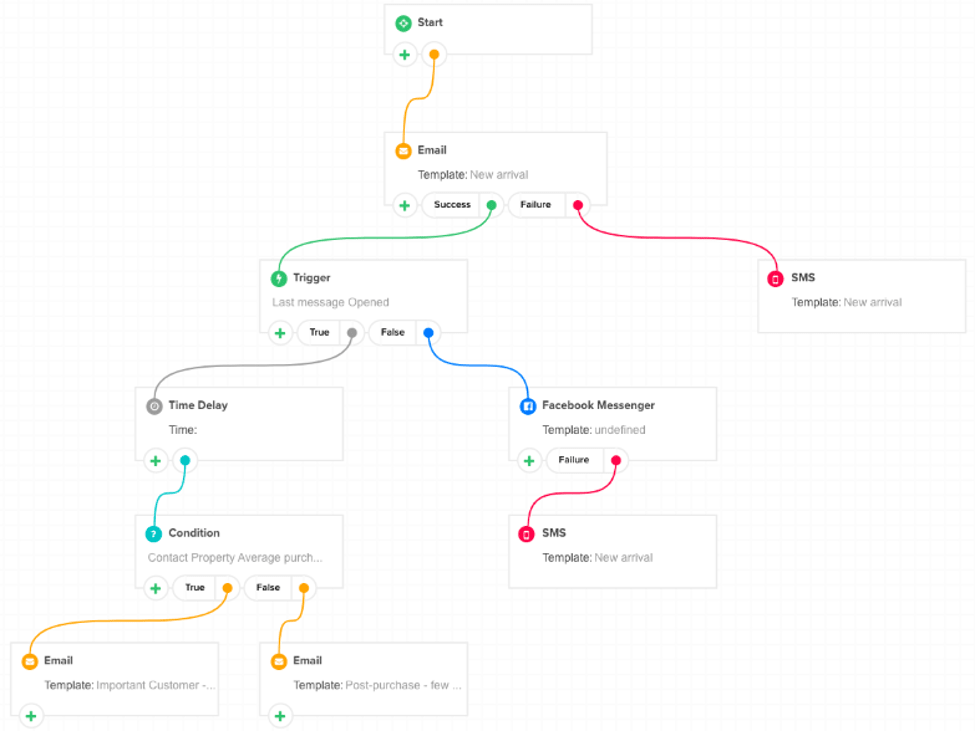 Carts Guru’s reactive workflow
In short, any in-workflow segmentation done on the Omnisend platform shrinks your potential audience, while with the Carts Guru tool you can segment your audience, react to their behavior and reach them on their preferred channel without losing anyone along the way.

We built the workflow and we sent the campaign. There’s only one thing left to compare: the data analysis!

Many e-commerce stores use different automation tools for each marketing channel and struggle when it comes to combining the metrics from each channel and analyzing them in a cohesive way. Both Carts Guru and Omnisend prevent this issue by providing users with all their online marketing metrics, from every channel, ready to be analyzed in one place.
‍
Both tools allow users to analyze the key revenue-based metrics, such as ROI, or marketing metrics, like open-rate. 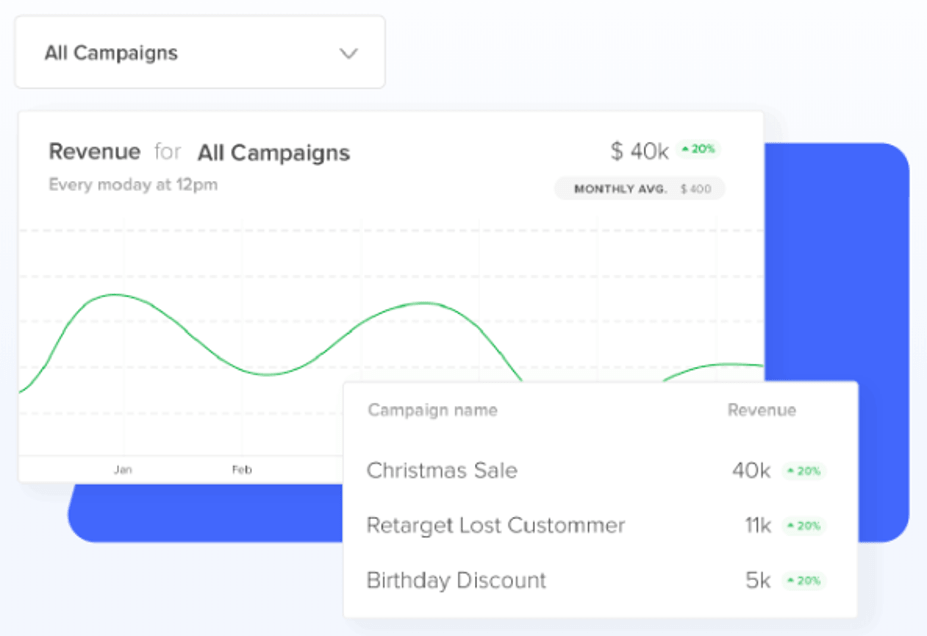 Carts Guru Dashboard
One key difference between the two is that Carts Guru allows you to divide your metrics by channel to work out the influence each channel is having on your customers.

Outcome - Carts Guru for the win!

Looking broadly at Carts Guru and Omnisend, you’ll find that both allow users to deeply segment their audience, design beautiful messaging templates, build multichannel workflows, and analyze the real-time metrics generated by their campaigns.
‍
However, once you get onto each platform and start building campaigns you realize pretty quickly that Carts Guru is the superior tool. This is primarily because of Carts Guru’s in-workflow segmentation capabilities, which allow users to build reactive marketing campaigns that respond to customer’s interactions with previous messaging.
‍
This also makes the multichannel aspect of Carts Guru so much more meaningful, as you don’t just contact everyone on every channel. You treat each member of your contact list as an individual and contact them in the way they prefer on the channel they interact with most.