What is Omnisend: Features, Pricing and Review

Omnisend is one of the best-reviewed eCommerce marketing platforms currently on the market. It also boasts a LOT of functionality.

So we decided to dig into Omnisend's features and pricing to see if it really is as good as people say!

Of course, there are many different eCommerce marketing automation tools out there - including our own, CartsGuru. They all have different strengths and weaknesses.

All that choice is a good thing for online businesses because it means that you can select those that best suit your needs. But you need to be able to cut through the hype and assess which particular set of features you need most within your budget.

Omnisend positions itself as:
It certainly looks impressive, combining seven different marketing channels:
But the biggest problem we can see right away is that Omnisend comes at a price.
‍
Click on any of the links below to jump ahead to the indicated section:
Otherwise, read on!

1. Omnisend - What Each Package Includes 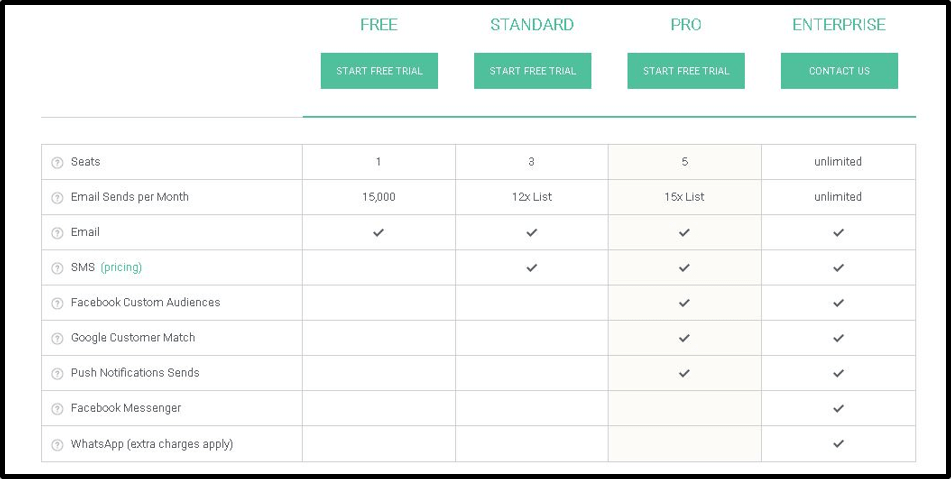 Source: www.omnisend.com
Omnisend's free version only includes email - none of the other channels.The next tier up, the Standard Package, includes SMS. You pay $16 per month for the Standard Package.However, you also need to buy credits to use the SMS feature. That's fairly standard across all SMS marketing platforms, but Omnisend's is not the cheapest.

Not much of a difference when you look at it like that, but it makes CartsGuru $21 cheaper per 10,000 SMS messages sent.

We'll come back to other restrictions in Omnisend's SMS offering later on, but let's finish working our way through the channels you get at each pricing tier.

When you make the jump from Standard to Pro, you get access to Facebook and Google retargeting as well as Web Push Notifications.

The Standard Package is just $16 a month. That makes it cheaper than the closest equivalent package from Klaviyo but more expensive than MailChimp.

Shifting to the Pro Package, however, pushes the price up from $16/month to a whopping $199/month.

And if you want their Facebook Messenger or Whatsapp functionality, you have to switch up AGAIN to the Enterprise Package.

And they don't give pricing information for that...
But Omnisend's support website DOES say that to use Whatsapp messaging:
So you can see the problem with Omnisend's positioning.

If you want all the features Omnisend has to offer, it's going to cost you.

That's going to put it beyond the budget of many small businesses that want to offer a real cross-channel experience to customers and leads.

By contrast, Carts Guru makes all of our features and channels available to all users.  No matter how small your list or your budget, CartsGuru offers truly integrated email, SMS and Facebook Messenger marketing.

Even on the free package.

If you want to include Facebook Messenger in your campaigns, Omnisend will make you pay for the top-level Enterprise Package.

A close inspection of Omnisend's customer support pages reveals some more uncomfortable restrictions around the channels it offers.

We've already covered Whatsapp above, but there are qualifications around other channels too: 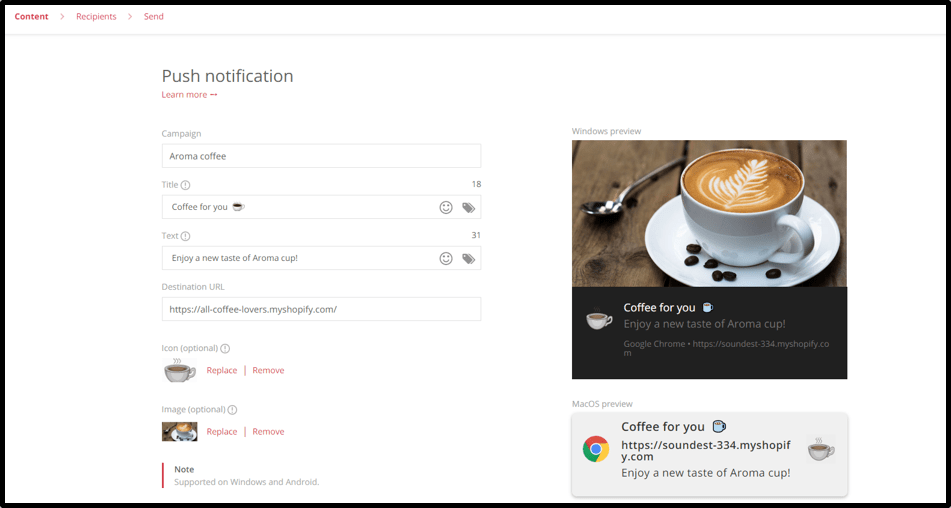 Source: www.omnisend.com
Facebook Retargeting
Google Retargeting
Even if you're prepared to pay the monthly fee to get access to these channels, that is a long list of special requirements that could rule your business out.

And you need to have created an account with Omnisend to find those conditions tucked away with the help center documentation.

To be fair, Omnisend does provide a 14-day free trial giving access to all features up to Pro level (ie SMS, Web Push Notifications, Facebook and Google retargeting).

So you can find out all these things that may make Omnisend less valuable to you without paying any fees.

And some of these constraints apply to all products. They're beyond Omnisend's control.
‍
But you should take care to read the small print and really make use of that free trial to explore how Omnisend would work for you.

Source: www.omnisend.com
Where Omnisend really excels is as an email marketing platform for eCommerce.

That's the core offering, with all the other channels built on top of email and more or less integrated into the overall package.

One point where Omnisend really stands out is in the number of emails you can send for the price.

The Standard, Pro and even Free Packages allow you to send up to 15,000 messages per month.

‍Maybe that's another signal that it is aiming for a larger-sized audience?

Source: www.omnisend.com
Omnisend has a nice, intuitive email builder with lots of default blocks and a solid range of options.

You can also save your custom templates and reuse them, which is handy and time-saving.

Some reviews (mainly from graphic designers and other design-focused professionals) have said advanced visual capabilities are not as good as some alternatives, but for the vast majority Omnisend has everything you need.

It IS 2020 mind you, so you would expect all marketing automation platforms to look professional and to have a straightforward visual builder. And Omnisend is on par with the competition.

It would have been useful for the email builder to include an HTML option for the more advanced marketers using the platform, but that's a minor gripe.

‍What is more irritating is the Omnisend watermark you have to include at the bottom of all messages! 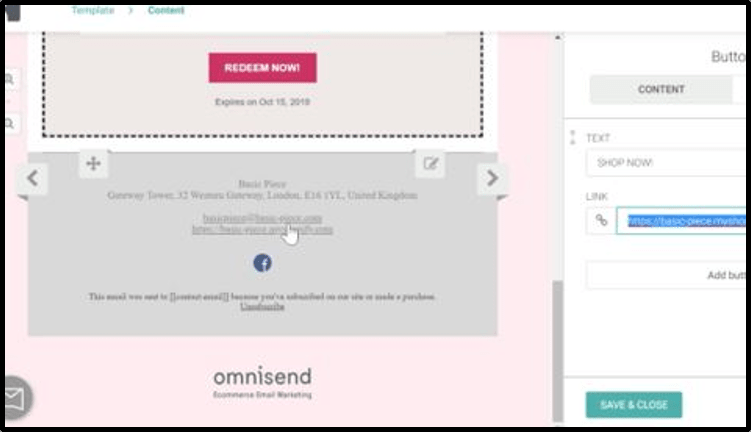 Source: www.omnisend.com
It's a strange decision on Omnisend's part because when you're building pop-up lead capture forms within their system, you DO have the option to switch the branding off.

Source: www.omnisend.com
So Omnisend is clearly aware that store owners want white-labeled solutions without third-party branding on their websites.

It's odd then that they would not extend that white-label approach to emails.

Just as an aside, CartsGuru does both.

You can't fault Omnisend on the range of off-the-shelf eCommerce store integrations it offers.

Source: www.omnisend.com
That is a lot of no-code choices, making it very simple to integrate Omnisend as a marketing platform on top of almost every shop out there.

They also provide an API for integrating the service into custom and bespoke stories.

Omnisend is particularly admired for its Shopify integration, which goes deep into the platform.

This makes a lot of sense, as Omnisend has pitched hard to win over MailChimp users disillusioned by the latter's break-up with Shopify and subsequent price increases.

For example, when building Omnisend emails you can define and deploy Shopify discount codes directly within the builder app.

If you want to do that for any other store, you need to go into their platform, create a discount there and then post the code into the Omnisend email. 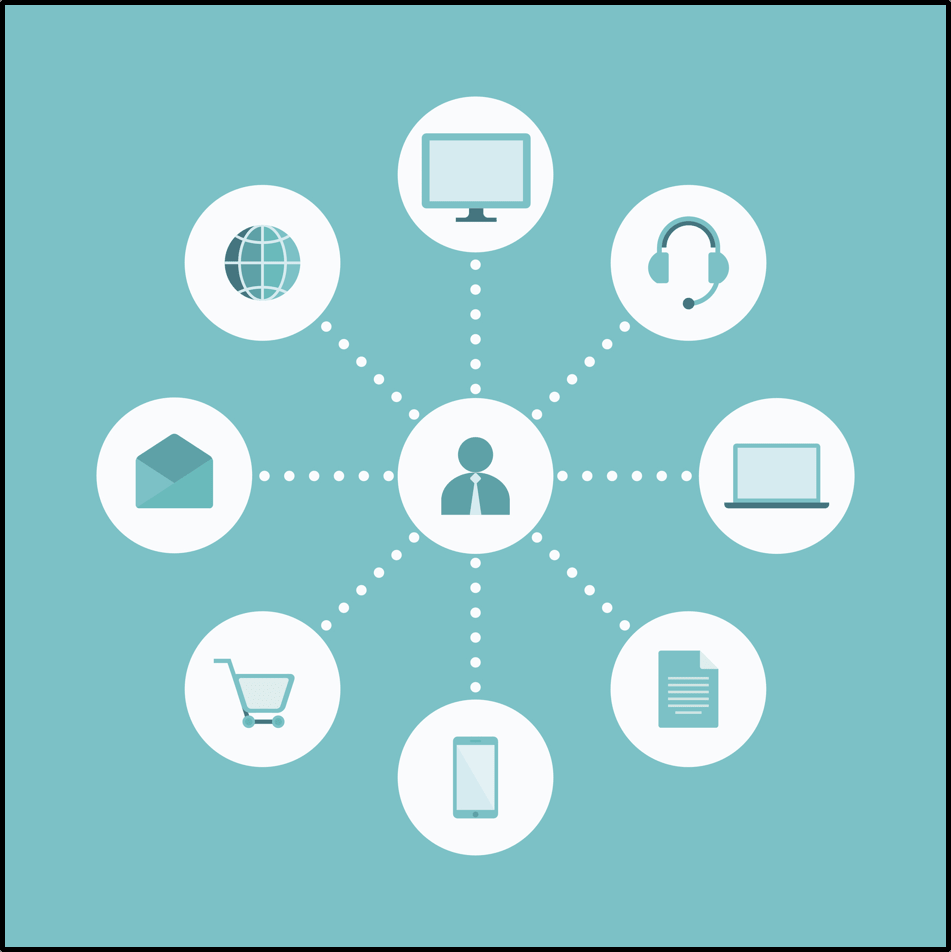 Source: www.omnisend.com
Here's another area where Omnisend's omnichannel claims don't quite stack up.

It provides everything you would expect from a marketing automation platform in terms of analytics when it comes to email.

‍But there is no clickthrough analysis available for SMS or for Facebook Messenger channels.

If you're paying a premium price to get those capabilities, wouldn't you want to be able to analyze their performance relative to email?

Omnisend puts all the cross-channel campaign analytics into one place, but it doesn't allow you to compare channels against one another.

They can be customized for look and feel, where and when they appear and many other criteria. Omnisend's good reputation for lead generation is well-deserved. 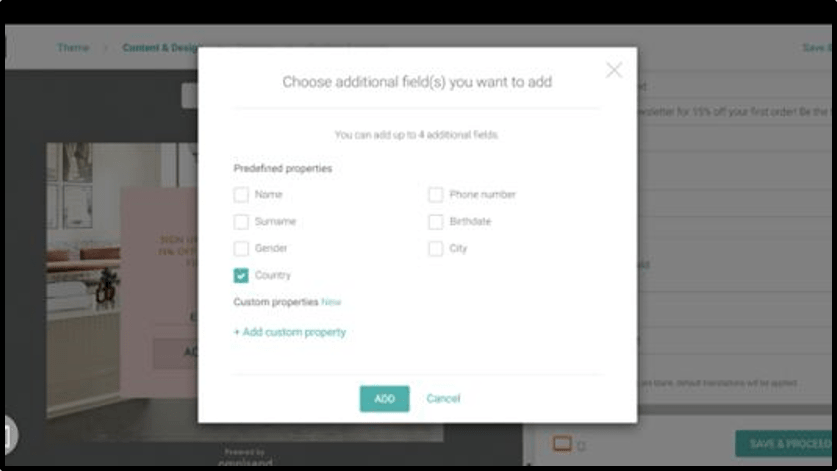 As mentioned above, you can take the Omnisend logo out of the web forms - unlike emails.

One nice feature Omnisend has is gamified lead capture pop-ups. So, for example, you can give visitors a spin on the wheel of fortune in exchange for their details.

It's not a unique feature. See our version below. But it's pretty cool nevertheless. 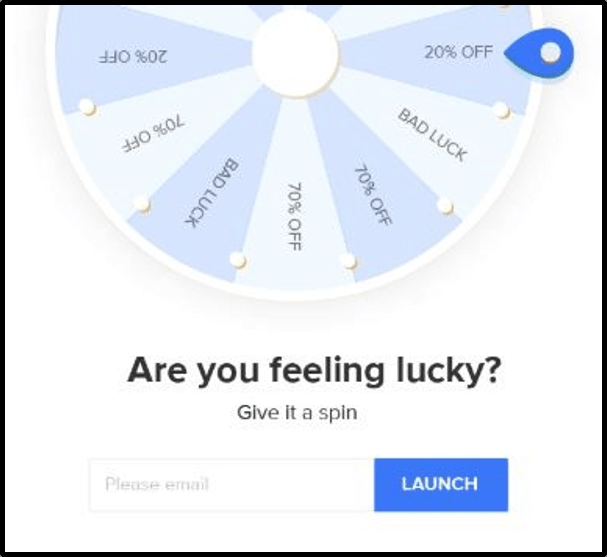 Omnisend provides in-depth segmentation, enabling you to split your lists up along a whole host of lines, including:
It is particularly good on purchase history segmentation, making it simple to filter users in and out on the basis of their responses to previous campaigns. 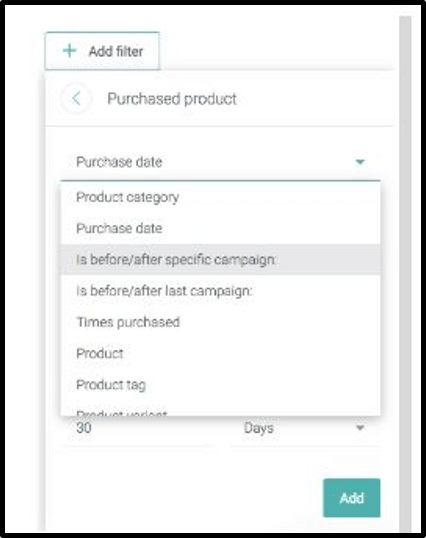 Source: www.omnisend.com
But as we've already pointed out, the multichannel interaction data is not there to segment audiences on.

There are a few undesirable quirks in Omnisend's otherwise straightforward and comprehensive automation system as well.
That's all to say that Omnisend's capabilities are all very linear, driving towards a single goal. 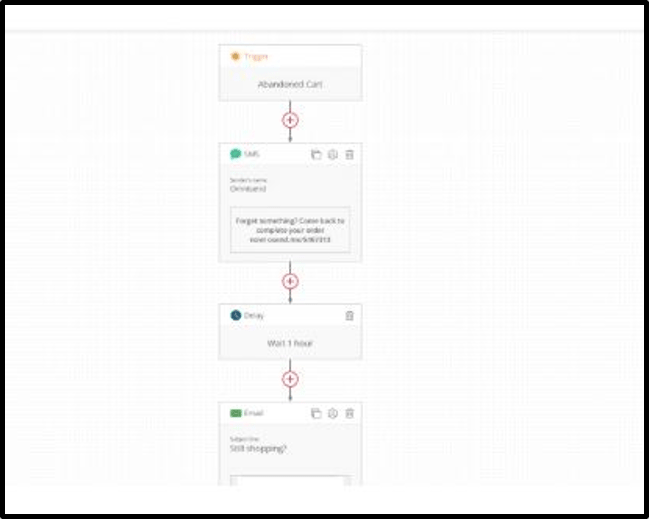 Source: www.omnisend.com
Compare that to CartsGuru's workflow builder, which allows for branching and multiple endpoints. 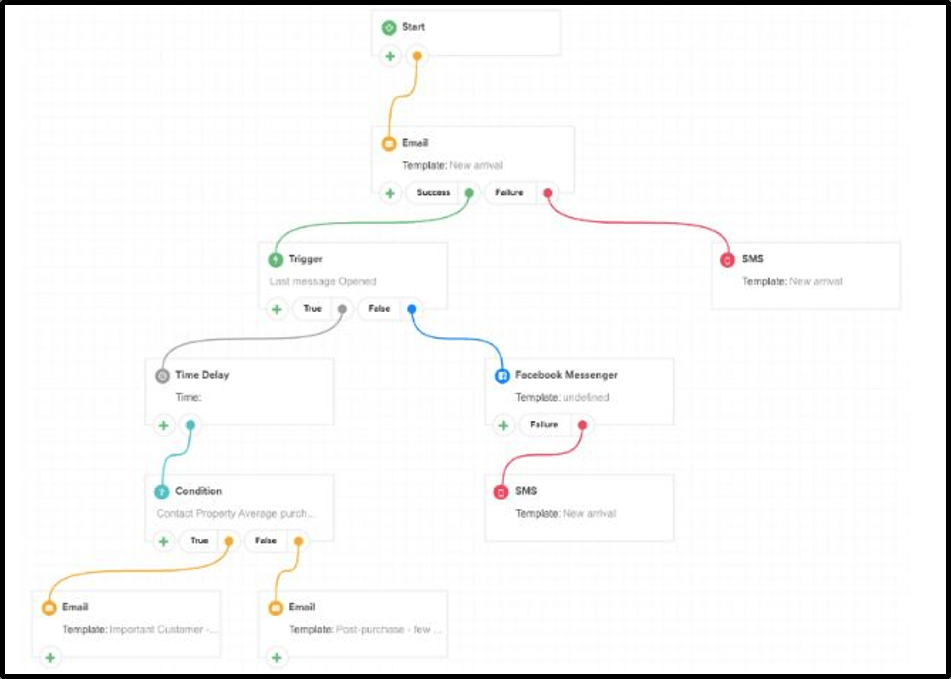 Omnisend is great at what it does.

But like all platforms, what it does is tailored to a very particular set of requirements.

If you need a high capacity email marketing solution that's simple to use and does most of the things the competition does, Omnisend is ideal.

The problems begin when you start to look at the "omnichannel" aspects.

The price goes through the roof when you want to do more than just send emails and SMS messages.

There are a lot of limits on the use of the other channels and some worrying shortcomings in analyzing their performance.

If your budget stretches to AT LEAST the $199 per month Pro Package then that may not be a problem for you.

But the jump in cost simply to get hold of the Web Push Notifications and retargeting - to say nothing of Facebook Messenger and Whatsapp - are going to put the omnichannel promises of Omnisend beyond the reach of a lot of online businesses.