Omnisend Pricing Plans: Everything You Need to Know

Omnisend pricing can be confusing and if you want to use the platform's full multichannel capabilities, it's not cheap.

At face value, it's hard to find fault with the eCommerce marketing automation platform Omnisend.
Combine that with a generous free trial offer that includes all features up to Pro level, a permanently free product tier, and monthly email send limits that put competitors like Klaviyo in the shade. You have to look pretty carefully to find someone with a bad word to say about Omnisend.

Source: www.omnisend.com
And we're not about to break ranks on that.

Omnisend is a great product. If it's right for you, it will deliver ROI for you. No doubt about it. But there's the kicker: "if it's right for you".
‍
Omnisend’s pricing is one area where you do come across quite a few gripes in the reviews.
‍
It's not hard to see why.
‍
Here's the basic Omnisend pricing matrix. 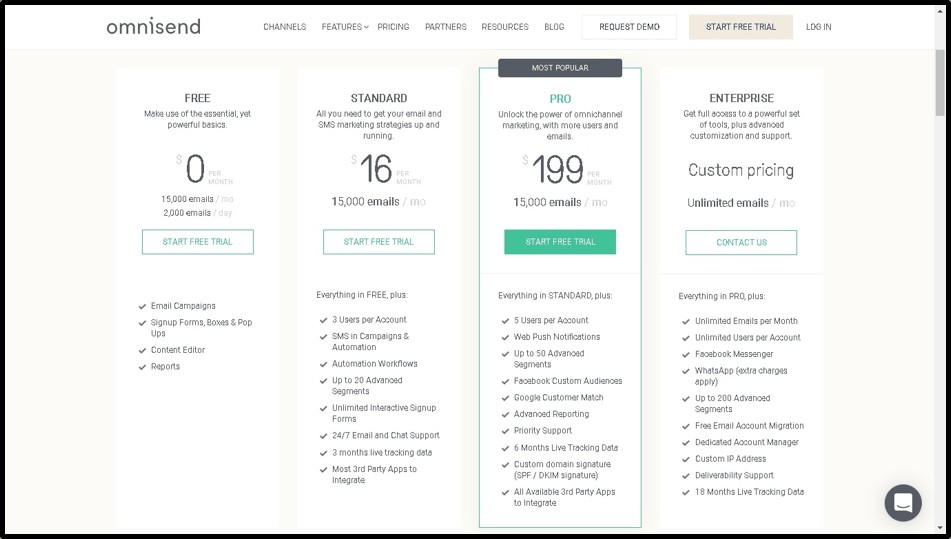 Source: www.omnisend.com
In this article, we'll dig right into Omnisend pricing to show what you really get for your money at each tier.

What we'll see is that it's complex, there are wide jumps between price tiers and it's very easy to rack up big costs if you really want to make use of their omnichannel capabilities.
‍
Why?

Source: www.omnisend.com
So, as we examine Omnisend’s pricing plans one by one, we'll chip in with the occasional comparison to Carts Guru's offering.

Click on any of the links below to jump ahead:
Carts Guru is an advanced e-Commerce marketing automation platform that combines email, SMS and Facebook Messenger seamlessly. Check out our features here.

We should make it clear right away that there's a difference between the FREE TRIAL Omnisend offers and the FREE TIER of the service:
We'll come back to the Free Trial when we look at the Pro Package. For now, let's just say Carts Guru offers a 14-day free trial as well which gives you access to ALL our features.
As a basic email marketing package, the free version of Omnisend is pretty good and it's well worth your consideration if you have zero budget.
But you DON'T get some important features:
At this level, it can't really be called an eCommerce marketing automation platform.

But it certainly lets you send a lot of very nice looking emails out! 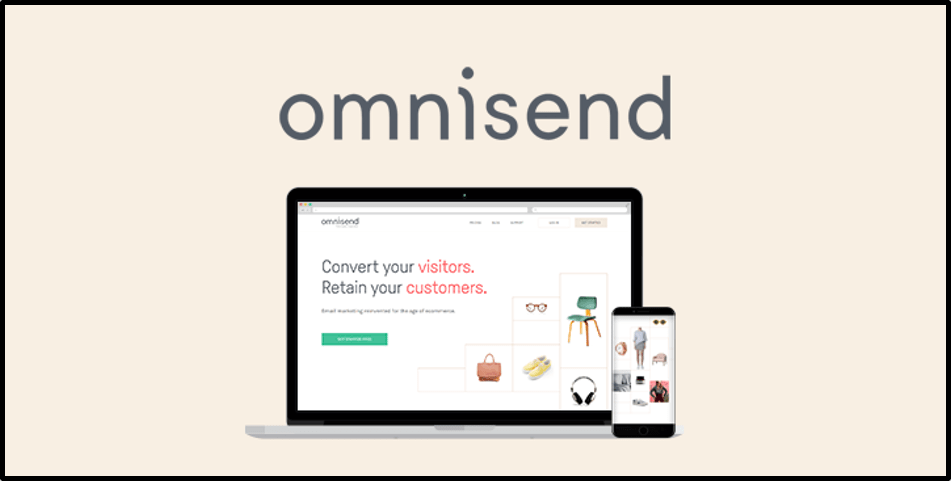 The big differences between this and the Free Package are:
At the lowest level, you'll pay $16 a month for the Standard Package. This drops to $13 if you pay annually.

Across Omnisend's pricing plans, you can expect a discount of somewhere between 18.5% and 2  for paying annually instead of monthly.

Here's where the problems begin.

You expect to pay separately for SMS messages. That's a given.

Omnisend is more expensive per SMS than competitors, including Carts Guru.

Here's what you'll pay Omnisend for one thousand SMS messages in the USA: 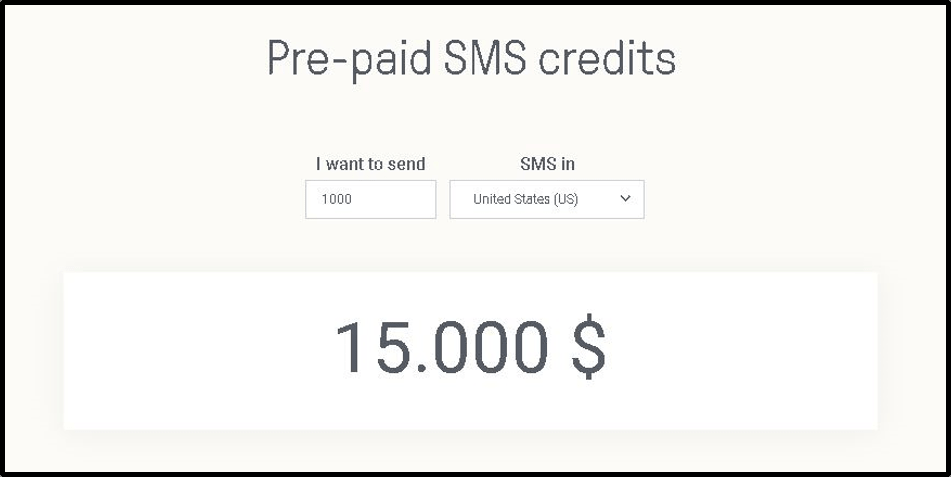 Source: www.omnisend.com
And here's what you'll pay for one thousand SMSs in the UK: 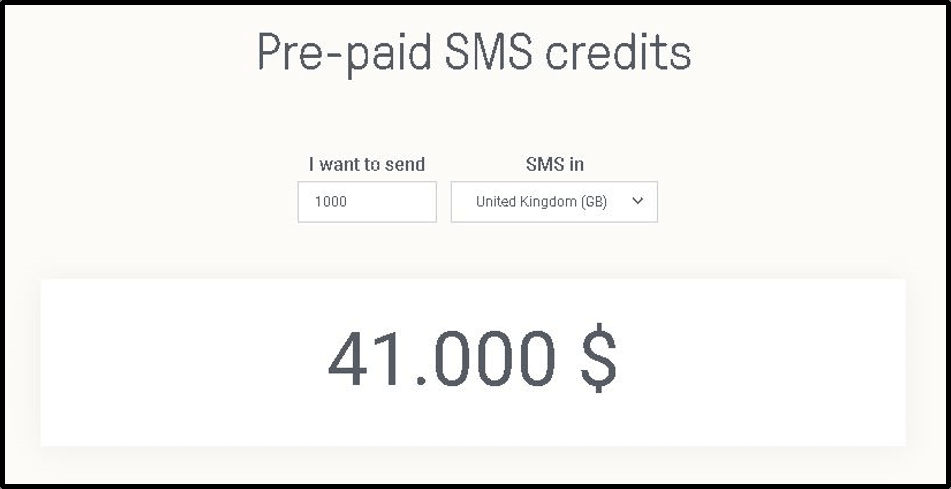 For these countries, Omnisend's SMS service is 14% and 7.1% more expensive than Carts Guru.
‍
Plus:
But what happens if you run out of SMS credits mid-campaign? Not a problem for Carts Guru - we automatically move contacts on if SMSs can't be sent...

Here's the other big problem we have with Omnisend pricing.

The relationship between how many emails you can send, how many contacts you can have and what you pay is really confusing.

This applies to the Pro Package as well as the Standard Package, but we'll deal with it now.

Omnisend in fact claims: Our pricing is simple: you only pay for the number of subscribers you have and the feature set you need.

And on their pricing page, you can type in the number of subscribers you have and it will give you a maximum number of email sends and a price, like this: 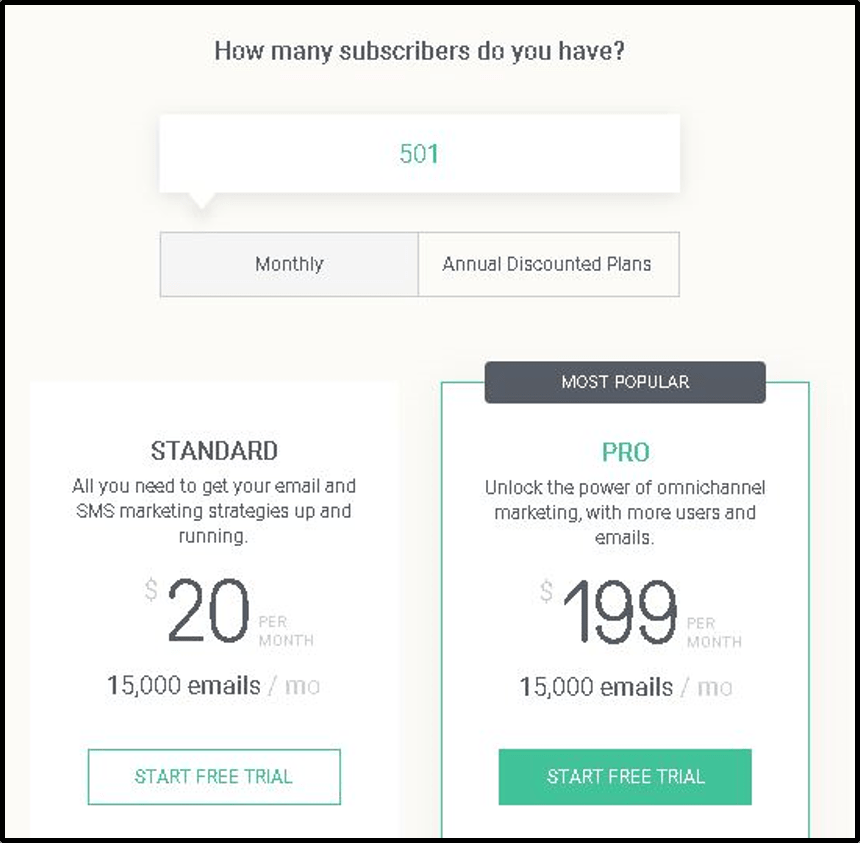 Source: www.omnisend.com
As you can see, that $16 per month tier doesn't take you very far. Now take a look at this: 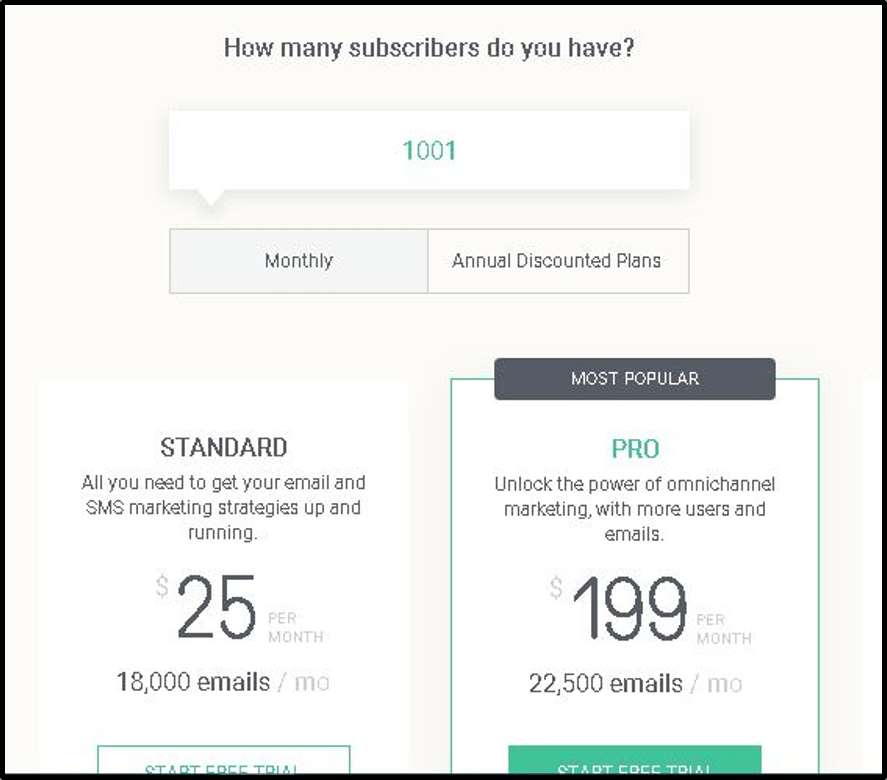 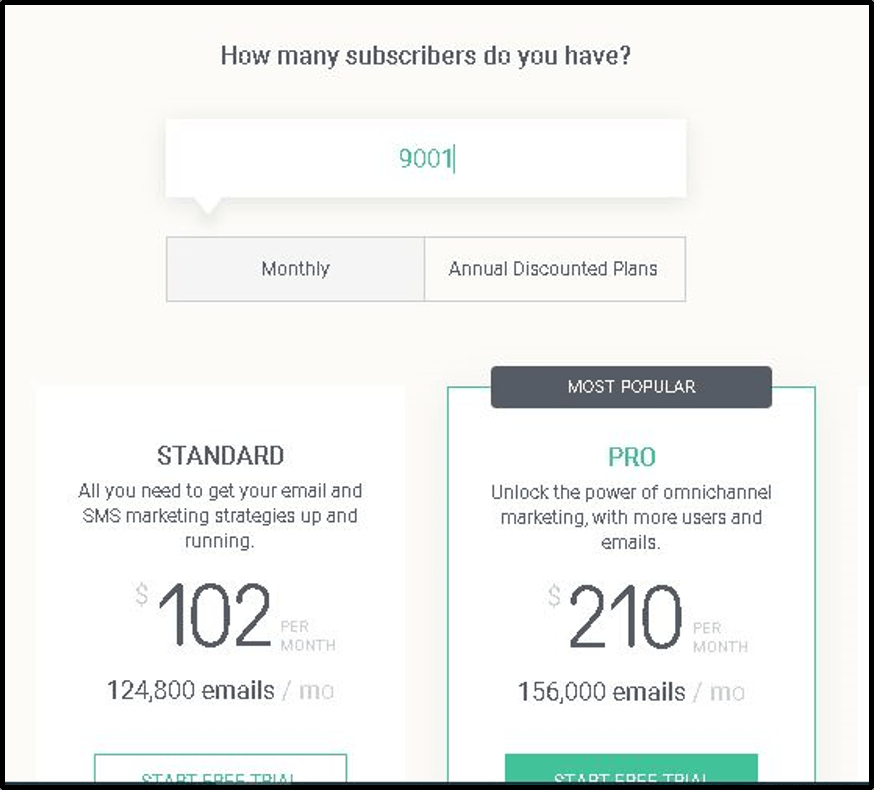 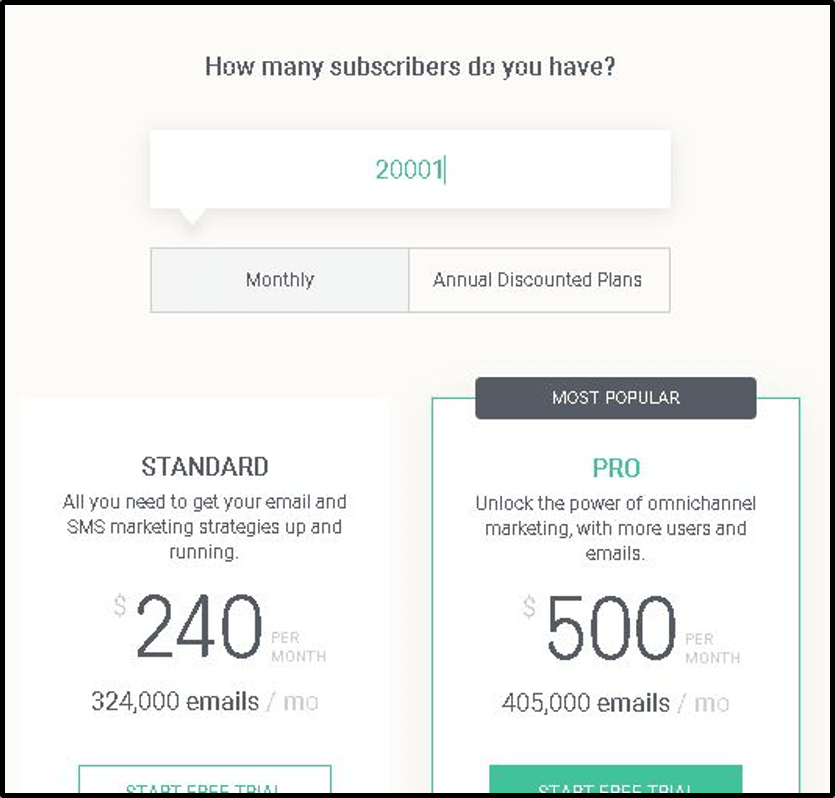 Source: www.omnisend.com
Get it? No, us neither.

Further down into the pricing and features sheet, Omnisend says the Standard Package gets email sends per month equal to 12 times the subscriber number (and Pro subscribers get 15 times subscribers).

But that's not what this is showing.

Come at it from a different direction and it's even more confusing.

Suppose you want to send a specific number of emails per month.

Omnisend forces you to reverse engineer their calculations!

Suppose you're on the Pro Package and you know you need to send 500,000 messages a month. You have to figure out how many subscribers would get you that many emails... 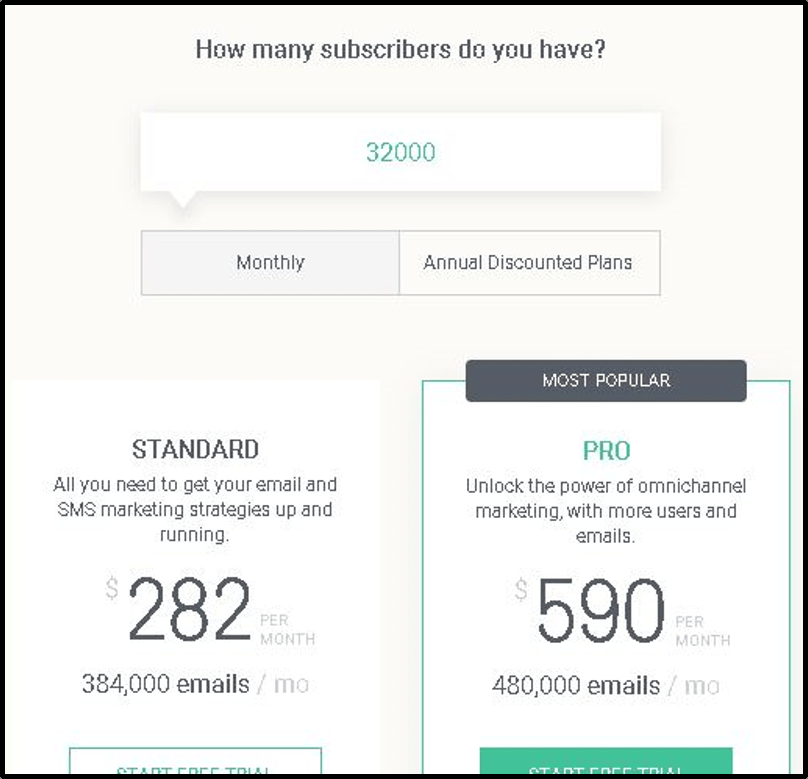 Source: www.omnisend.com
And the thresholds can have a big impact on what you pay. If 480,000 isn't enough, adding one more subscriber takes you to this: 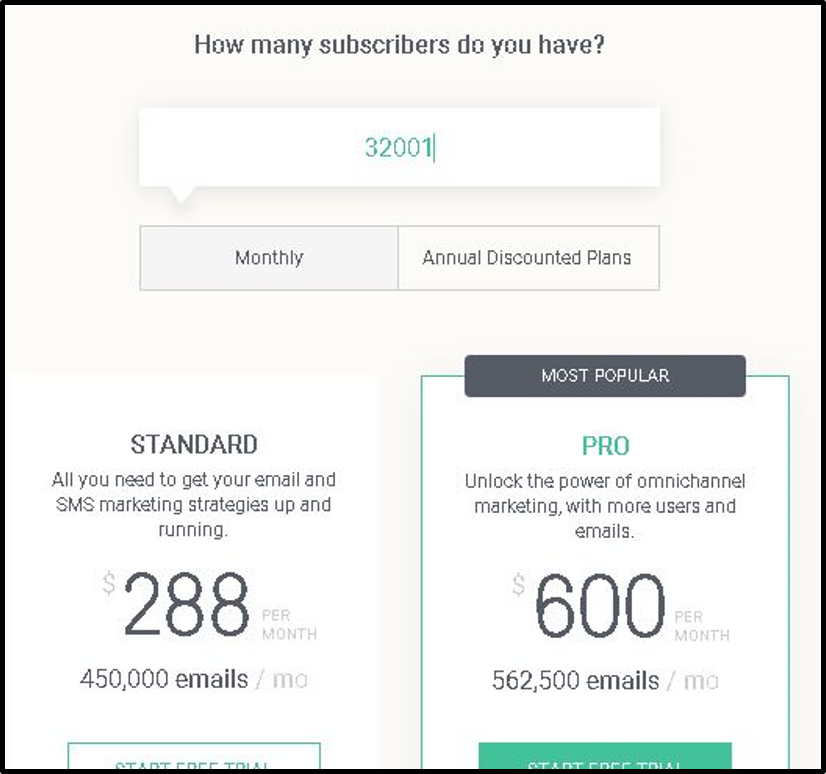 Source: www.omnisend.com
If you prefer an absolutely clear pricing model, take a look at Carts Guru. The number of emails you get is ALWAYS 10x the number of contacts in your list.

At the Standard level, you only get two of the seven channels Omnisend has to offer.

To get five - email, SMS, Web Push Notifications and retargeting via Facebook and Google - you have to step up to the Pro Package.

‍That's over 12 times more expensive than the Standard Package or a difference of $183 per month ($2,196 per year) at the entry-level.

What else do you get?

You get "Priority Support", more integration options, more segments and a few more options in the email builder.
‍
That is a huge jump in price.

And it's at this level, not the $16 a month headline figure you see quoted everywhere, that Omnisend really becomes a multichannel tool.

‍But it doesn't end there. Check out this page from Omnisend's support site: 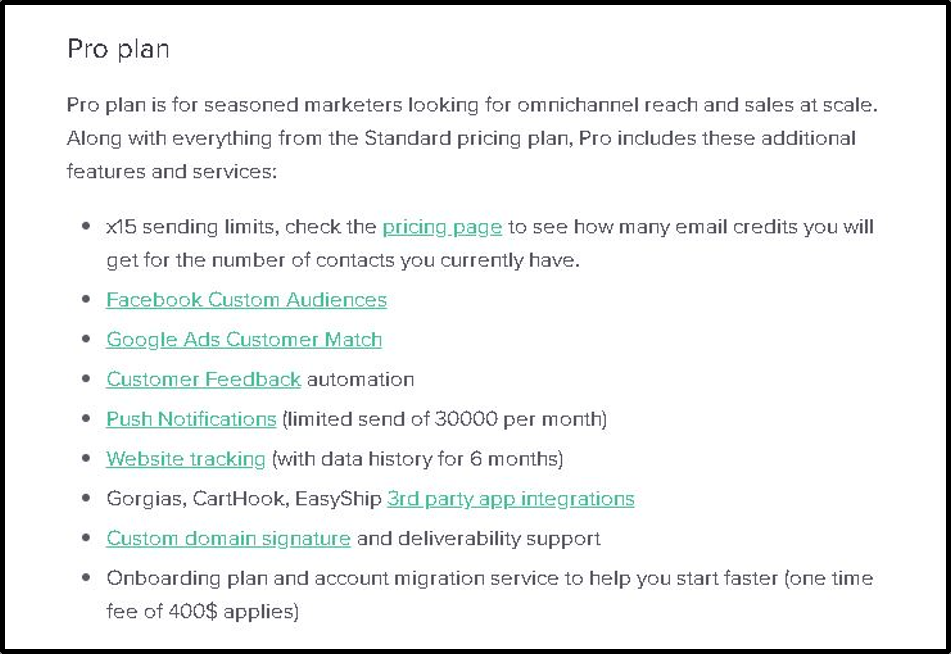 Before we move on, let's go back to the email message allowance/subscriber number/price calculation, because if you're anything like us, you're still confused.

If you need more email credits than is allowed on your price tier, you can buy more by clicking the "Charge Now" button in your account. It works like this:

Source: www.omnisend.com
What this appears to mean is that if you need more email credits in the first week of a month, you have to double your credits and your monthly cost for that month.

On the other hand, if you do it in the fourth week of a month, you get an extra 25% (roughly) for an extra 25% of your monthly fee.

Why? It's confusing and inflexible.

‍BUT you can get a free trial of all the features Omnisend has to offer up to Pro level for 14 days. So you do have the chance to see whether it's worth the significant outlay that getting hold of these extra channels entails. 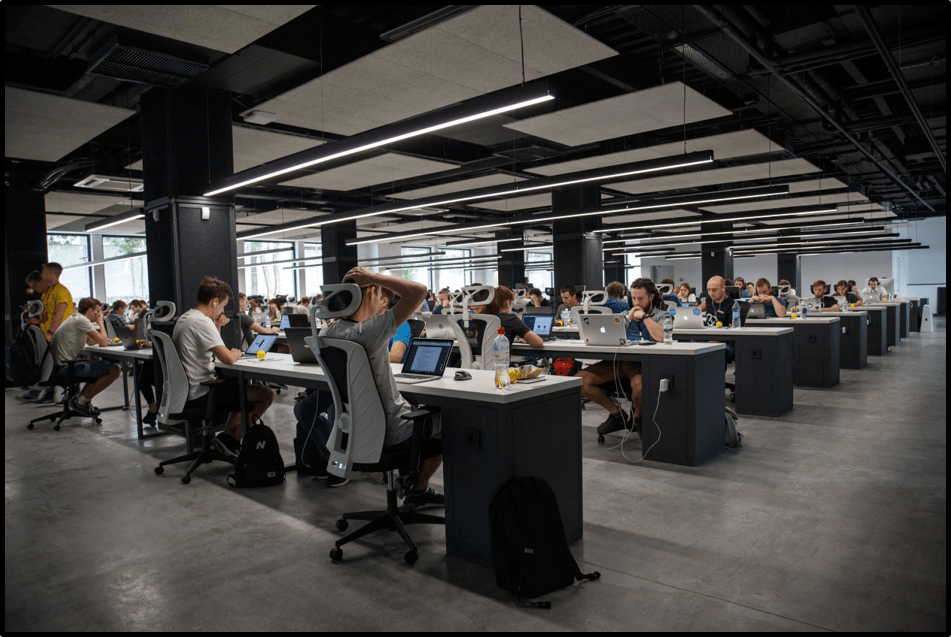 The top tier service that Omnisend offers is its Enterprise Package.

If you want all seven of the channels Omnisend can provide - adding Facebook Messenger and WhatsApp to the five you get at Pro level - this is what you have to go for.

Omnisend doesn't give a price for the Enterprise Package on site - it just says "custom pricing".

‍However, third-party review sites like FinancesOnline and Omnisend partners like Shopify say that it costs $2,000 a month.

‍So if you thought the step up from Standard to Pro was steep, think again! 😱

Pricing is simple at the Enterprise level at least, because you get unlimited subscribers and unlimited emails (subject to fair use).

Source: www.messenger.com
Just like it's free as part of Carts Guru's service. The difference is, we provide it to EVERYONE as standard from our smallest customers to the biggest.

Source: www.whatsapp.com
Despite the fact that you're probably paying $2,000 a month to be on the Enterprise Package, there are even more charges in store. This is taken from Omnisend's support site once again. 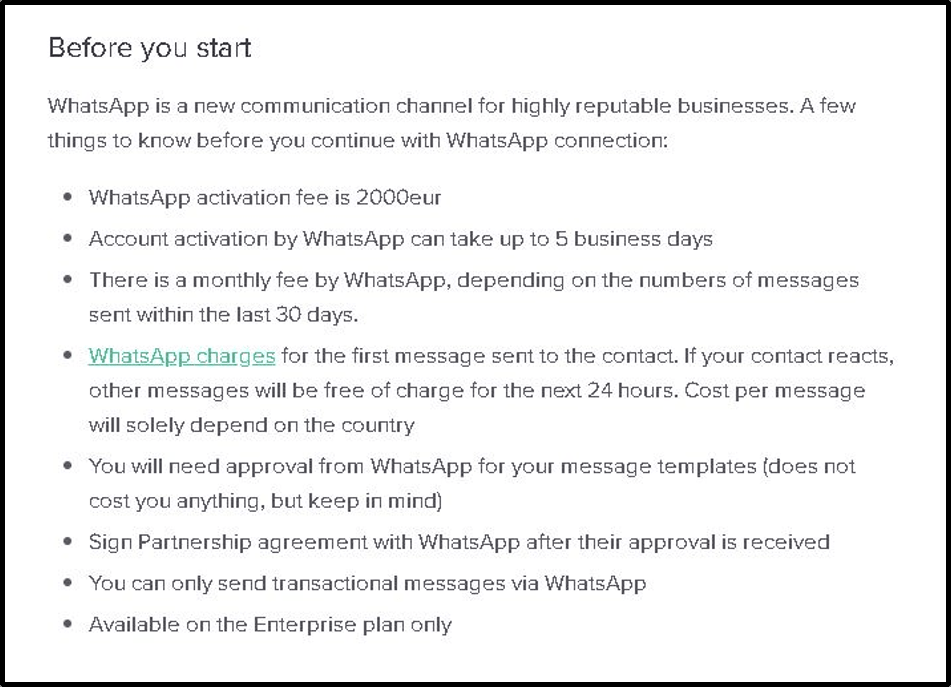 Source: www.support.omnisend.com
You will be charged 2,000 euros as a WhatsApp activation fee AND pay a monthly fee to WhatsApp themselves. 😲

The way Omnisend has priced its services makes it look less like a multichannel marketing automation platform and more like an email service that has bolted on new bits and pieces over time.

Like we said at the start, Omnisend is a great platform for eCommerce.

But if you're looking for an alternative that really puts multichannel marketing capabilities into the hands of every type of business then you should consider Carts Guru.

Source: www.carts.guru
Size doesn't matter to us. All our customers get all of our features.

And our pricing is transparent and simple. It's based on a single sliding scale, so you can see exactly what you pay at every level, whether it's this: 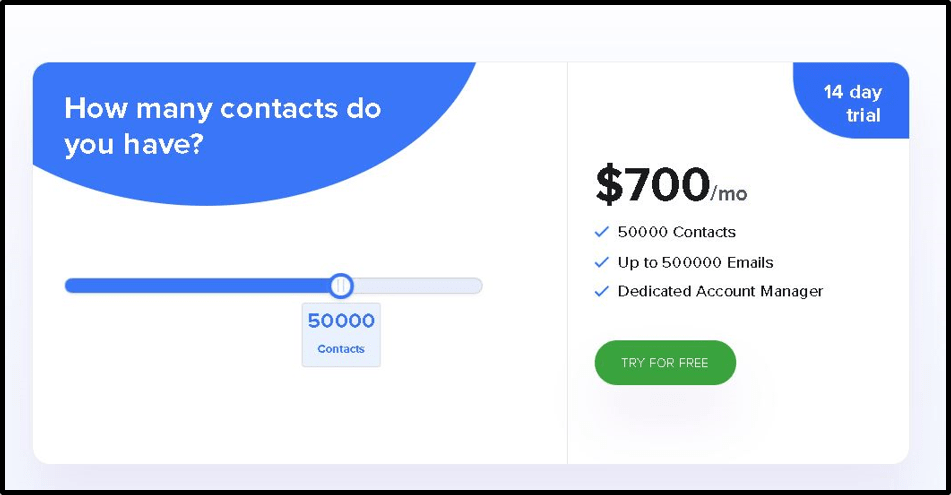 Source: www.carts.guru
Omnisend has been priced in such a way that it puts the multichannel experience it promises far beyond the reach of many businesses that will be attracted by the "$16 a month" entry point.

‍If you're looking for a truly multichannel eCommerce platform without the price tag and the hidden extras, try Carts Guru for 14 days for free. You won't be disappointed.
Here at Cart Guru, we've taken a different approach. We've made our pricing transparent and simple. And we make ALL features available to ALL our customers, no matter how much they pay.

This is how we do our pricing: